As bride's look more and more for ways to let their own personal style speak louder at their wedding, we have the perfect example. This chic Pnina Tornai bride rocked her wedding day. Without a single doubt. You may even recognize Crissa as she and her rocking squad took the internet by storm with their fabulous leather jackets and big black shades - vamping it up for the husband and wife team, The Portos, who captured her big day. Not only did she find her Pnina Tornai gown at Kleinfeld Bridal, she polished her style right down to a darker makeup look that just fit her charismatic personality. This chic Pnina Tornai bride rocked her wedding day with an Italian-inspired vision meets boho vibe with a sprinkle of edgy glam. Three incredibly diverse "themes" that planner Runway Events made work at the Bella Collina in Montverde, Florida.

Meeting your soul mate before a planned temporary 6-month move to Australia, is probably not recommended. But as all romantics know, you can't plan when love strikes. Case in point? Crissa and George who developed a strong foundation just beyond the edge of "friends" and developed their relationship into an unshakable passion over FaceTime. Ahhhh, the land of social media and the way it keeps us connected! George didn't waste time putting a "ring on it." And when he asked Crissa to be his wife he planned to continue his swoon-fest romance with a setting that glowed under 250 candles covering a rooftop, 100 string lights hanging above them with loads of greenery and flowers with of course a flat screen TV ready to cue their love story. George may have been her first "yes," but her second was at Kleinfeld Bridal during a work trip in New York shortly after her engagement. Always being a fan of designer Pnina Tornai, she never imagined affording one of her dazzling couture gowns - until she discovered the LOVE by Pnina Tornai line. With Italian roots, Crissa knew she wanted with venue that felt like Tuscany. Surrounded by Italian pine trees, rolling hills and architecture reminiscent of the Italy they fell for Bella Collina. Gold and black accents with loads of greenery filled out the rest of her fairytale. This chic Pnina Tornai bride rocked her wedding day in spades and smiles. 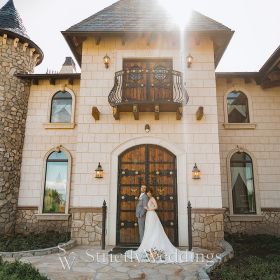 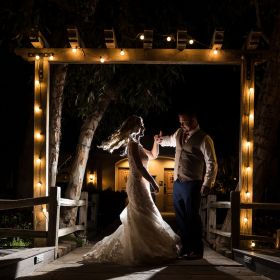 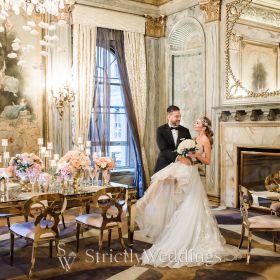 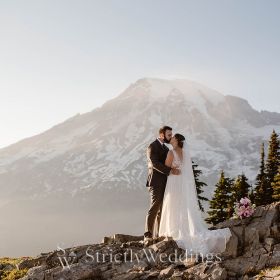