When the bright lights, big city vibe of Vegas has played a major role in your relationship it only makes sense to have your destination I DO's there. And this fabulous couple, rocked it. With winning wedding colors in Vegas at the luxurious Wynn Las Vegas hotel. We're talking pops of pink and orange with iridescent accents that glow off our page thanks to the gorgeous gallery from Callaway Gable behind the lens. If you are the kind of couple who marches to the beat of your own drum and likes a great party, Bayleigh and Cameron's wedding is SO for you. Their ceremony even took place at the XS Nightclub of the Wynn Hotel, known for its lavish décor as a gold-accented dance club with bottle service on the floor and featuring luxury cabanas surrounding the pool patio with headliner DJs. But, just await until you see how the Encore ballroom was transformed by the Wynn team with Social Gal Events on planning.

Bayleigh who stepped in out a dreamy Reem Acra gown for her big day didn't nix tradition with her party-wedding vibe. That being said it certainly was a bit more celebratory. Her winning wedding colors in Vegas played a major role in that. Since she was little, pink and orange have always been her two favorite colors. Bayleigh and Cameron knew they wanted everything to pop. Cue the color crush. As a couple, they travel to Vegas together about ten times a year since they began dating. Essentially, it is their second home. When visiting they love to gamble, go to clubs, see Kaskade together and visit her grandmother. But, this isn't where Cameron proposed. That special night was in Paris after their dinner on the Eiffel Tower. It was picture perfect and in all actuality his back-up plan! Originally, they had flown to Paris for a concert to see their favorite DJ, Kaskade. Sadly, it was cancelled and along with that were his plans to propose there. The following day they spent their time at Disneyland Paris. This is one fun loving power couple - can you tell? While the whole wedding day was perfectly magical, it was the behind the scene moments that continuously play in her memories of the night. Wondering around their favorite hotel taking photos with their favorite people in the world, waiting to walk down the aisle, goofing around on motorized scooters before their entrances into the ballroom. Those are the unforgettable times. 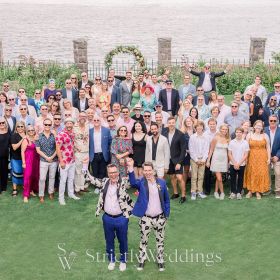 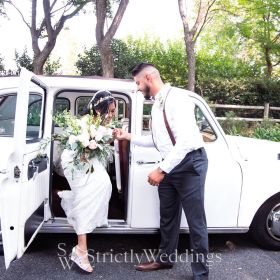 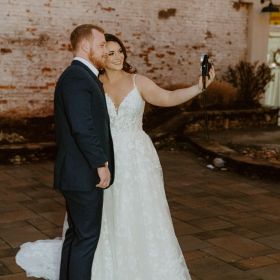